The voice of the public relations profession in the Middle East

The Middle East Public Relations Association (MEPRA) is the region’s leading body for public relations and communication professionals and students. Join our community to get industry insights, network with peers and further your professional skills. 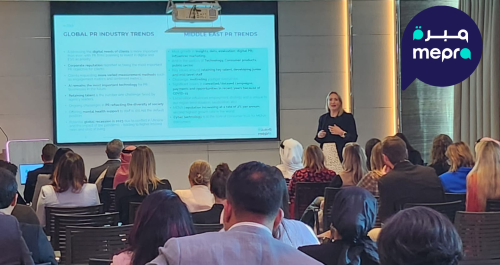 MEPRA to Focus on on Regional Expansion in 2023; Key Appointments Confirmed at 16 th AGM

Dubai, UAE. 2 February 2023: The Middle East Public Relations Association (MEPRA) successfully hosted its sixteenth Annual General Meeting (AGM) at the Marriott Resort, The Palm Jumeirah, where the major initiatives undertaken in 2022 were reviewed and the strategic
plan for 2023 was approved.

The new strategic agenda revolves around showcasing strategic initiatives that highlight MEPRA’s network growth in the region and innovative solutions for tangible change. Events including the MEPRA Majlis editions, Hackathons, and the much-awaited Awards segment were highlighted conversations held at the AGM while the Youth Board and its exclusive deal under discussion for the Golden Visa opportunity were hailed as a step forward in progress.

MEPRA has rolled out a 4-year growth map to expand its network in major countries like Qatar, Bahrain, Oman, and Egypt by 2026. Starting with Qatar, MEPRA will soon be seen conducting its very first networking event sponsored by BLJ Worldwide for an immersive PR networking
experience.

Founder and CEO of Acorn Strategies, Kate Midtun was formally elected Chair of the Association. She will be supported by Jon Barber, Vice President, Marketing & Communications, TECOM Group who was elected as Vice-Chair. Both will serve a two-year term.

13 new members were also voted on to the Strategy Board who, will be responsible for providing guidance the Executive Board strategy.

Speaking at the AGM, Kate Midttun said; “Last year was one of momentum, this year is one of growth. MEPRA has launched key events such as the Arabic Communications awards under the incredible leadership from our first Emirati Chairperson, Taryam Subaihi and Vice Chairperson Rashid al Awadhi. We continued to innovate and saw notable growth in membership. We look forward to continuing this momentum. There’s a need to extend our reach geographically, provide more depth in our academy and solve some of the industry’s biggest challenges. We are truly thankful for the visionary work of Taryam and Rashid who have created building blocks for the growth of the association.”

With a strong focus on the next generation, MEPRA’s Youth Board aims to increase its share of voice and volume with strategic initiatives that further boost knowledge-sharing, mentoring, and increased engagement. The Youth Board will also be seen collaborating with authorities to facilitate the golden visa applications for the MEPRA Youth Board Members and the Young Communicator of the Year (YCOTY) award winners. With such campaigns in the pipeline, the Youth Board aims to promote the role of PR professionals in creating a positive impact in the Middle East, supporting government visions and highlighting the vital role they play in growing the economy through success stories.

Yet another announcement made at the AGM was the revised MEPRA Charter 2023. With acode of ethics, professional practices, membership types and procedures, and MEPRA Chapters being discussed, the AGM also announced the Board’s roles and responsibilities. The impetus behind these revised structures is to provide the members with the essential tools and resources required for successful careers. The association stands committed to delivering sound and ethical counsel to members and their clients and agencies.

With the recently inducted MEPRA Arabic Awards, the association has decided to host the edition every two years. 2023 is also lined up with Hackathons to discuss regional PR expertise and growth areas. The association also plans on announcing some dynamic sessions on PR learnings and strategies to hone new talent. Another important event is the UAE Majlis which will be themed around sustainability and energy.

Kate Midtun joined the board with an impressive 20 years of experience across public relations and communications. She specializes in destination marketing and possesses deep sector knowledge in the real estate, leisure, and hospitality industries, globally. Jon Barber brings more than 25 years of experience in the Middle East and Europe. A Broadcast Journalist graduate of Nottingham Trent University, he spent more than 10 years with the BBC as a news and sport journalist, with the last 15 years working in the Middle East on communications programs in tourism, renewable energy and real estate.

Before you start posting, know your target audience and listen to them. This'll help you understand how to engage.

Case in Point: Expo 2020 Dubai - Bringing the World Together for People & Planet

How to Take Control of Your Own Career Journey and Excel!

What do you hope for your working future? Are you confident you have what it takes to realise your potential?   Join MYB for tips, techniques & resources you should use to take control of your own #career. Register now 👉 mepra.org/events pic.twitter.com/GJpPcsPWiT

🌟MEPRA is excited to introduce our newly elected Strategy Board Members, who will serve the region's communications industry for the next 2 years. 🌟 We are delighted to see some 'old' & new faces on board💪🏼 More about MEPRA Board👉🏼mepra.org/team #mepraboard pic.twitter.com/FepJAM1yhW

I’ve been involved with MEPRA since its formative stages and have seen it grow dramatically. What took 50 years for other associations around the world to accomplish, MEPRA will do in 10 years.